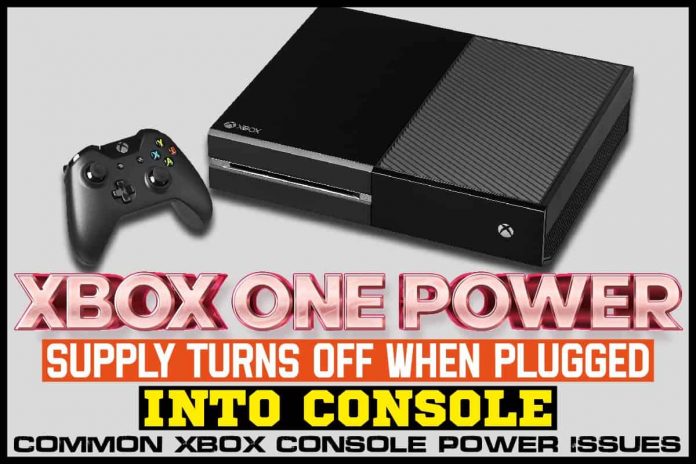 Many experts on Xbox console power issues are quick to point out that you should hard-power cycle your console if it constantly turns off when plugged. Keep in mind there is no one-solution fits all for all Xbox console power issues, it takes a careful examination and testing of all suspected sources of the problems to find the right solution. You may want to try your Xbox console on another power source to ascertain if the console itself is not the problem.

So why is my Xbox Power Supply Turning Off When Plugged into Console?

Your Xbox power supply turns off when plugged into console to save power. This often occur when there is a wrong power setting or when the power supply itself is faulty.

Xbox can turn off unexpectedly when plugged into its console and there is a growing number of people reporting this issue. While this could be a major malfunction, there are several other reasons it can happen. There are some steps you can take before you rush to Microsoft to report a broken or faulty console.  The following are troubleshooting options and possible solutions to the issue;

1. It Could be Ventilation Issue

One of the first suspect on Xbox power supply turning off when plugged into console is ventilation issue. Sometimes, overheating may cause poor ventilation around the console. You should get a message before the power supply turns off if there is overheating. To resolve this issue, turn off the Console and wait for about an hour before turning it back on. Make sure the Xbox has enough ventilation before you turn it back on. You may want to contact Microsoft online if this problem persists.

If improved ventilation does not resolve this issue, you may want to check the power brick. If you discover the light is flickering on the power brick or it has gone dark, then it could be a power supply problem and not the Xbox or its console.

Sometimes, Power supply may turn off when Xbox is plugged into its console when you set the device to automatic turn off. To fix this issue, go to “Settings” before selecting “Power and Supply”. Select “Turn Off After”. Tap on the “Don’t turn off automatically” option and the issue should be resolved after. It is also important that you ensure that the AC outlet that your Xbox One is plugged into is working properly.

Xbox One Wouldn’t Power Up

Xbox One shutting down unexpectedly is completely a different issue from Xbox One not powering up. This problem may be connected to the console itself, the power brick or internal power supply.

The first step you should take in this situation is to ensure that all connections are set up properly. You should also check that your power brick is working properly. If power flickers or there is no power supply, then the power brick should be replaced. All Xbox One power bricks do come with an indicator light to show they are getting electrical current.

If you check and discover a solid white or solid orange light, it means the power supply is working perfectly. If the light flickers or there is no light, then it should be replaced immediately.

2. Test Power Supply on Another Outlet

Try and use another outlet to conduct this test. You may want to plug something else into the socket or plug your Xbox power supply into another outlet. If your power supply is not receiving electric current from another socket, it might have become defective and needs to be replaced. If your console is registered, you should be able to request for a new power supply online.

If the controller is not powering up on your console, you may want to press the power button on the console directly. There might have been some syncing issues that ha caused the problem, these syncing are occasional.

Sometimes, this power issue may be unconnected to the power console. Intermitted issues with Xbox may lead to black screens while making attempts to turn their systems on. Some users may disconnect their internet before playing their Xbox games. Sometimes, you may have to wait on Microsoft to resolve server issues.

Sometimes, you may need to reset the internal power supply if every other solution has failed. To do this, power down the console, then unplug it from the socket. Wait for at least 10 seconds before you plug it back in.

When Your Xbox Wouldn’t Update

Xbox updates are mandatory, but many users often report issues about this. This problem may arise with your Xbox One, or an issue with your internet. Sometimes, this issue may arise with the set-up system that is not working properly. Regardless of the cause of the issue, you can take certain steps to resolve the problem before you contact Microsoft.

You may want to try and update the Xbox later, especially if the issue is from Microsoft’s end. Sometimes, Microsoft server maintenance or too many people trying to update at once may cause issues. Perhaps you should wait for one or two hours before you try and update again.

If this issue persists, you should consider checking the Microsoft Live status page. Microsoft will normally issue an alert if the problem is from its end.

If you are using a wireless connectivity on the Xbox and getting an error, you try a wired connection via the ethernet. Hardware issues can sometimes create update problems that you can easily resolved.

4. Cycle Your Xbox One

To cycle your Xbox One, hold the power button down for about 5 seconds, until it eventually shuts down. Unplug the device once it shuts down, and wait for about 30 seconds, before taking the next action. Plug the Xbox One back in and power it on. These steps should clear the Xbox cache and reset the network card.

If you are receiving a specific error with a code as regards updating your Xbox, One, you may want to refer to the Connection Error List offered by Microsoft and follow the prompt to resolve the issue. If the update still wouldn’t load at this point, then you should contact Microsoft.

Your Connected TV Is Not Displaying The Desired Resolution

Microsoft itself has confirmed that some Xbox users may not experience the right or the best resolution. Screen resolution issues can be quite easy to fix and it requires very few steps to handle;

Hit the menu button from the Xbox Dashboard and this will bring up the “Settings” option. Click on “Display & Sound” then choose the “TV Resolution”, before you select the ideal screen resolution settings.

If you are still having screen resolution issues after all the steps above, you may want to use another HDMI cable. If all these steps don’t help, please contact Microsoft directly.

Are Your Games Not Installing?

Any game on Xbox One must be installed, though the process normally happens at the background. You should also be able to play a game that is installing. Some users constantly report that game installation processes freeze and, in most cases, the games wouldn’t play at all. There are several ways of resolving this issue, these include the following;

1. Update to the Most Recent Patches

The installation issue could occur as a result of optical drive issues or poor internet connection. The first step to take is to ensure that your Xbox One console is updated with the most recent patches from Microsoft. If the system is offline, connect to the internet and allow your console complete the rest.

If you are online, there may be an issue with connectivity to Xbox live. The first step is to unhook your ethernet cable or disable from settings from your ethernet settings. Hold the power button down for about 10 seconds.

Reset the entire system but don’t connect online yet. If the installation begins normally, you should be able to reconnect to the Xbox live without issues. You may want to contact Microsoft if the issue persist. It is also important that you check that the disk is not damaged or corrupted.