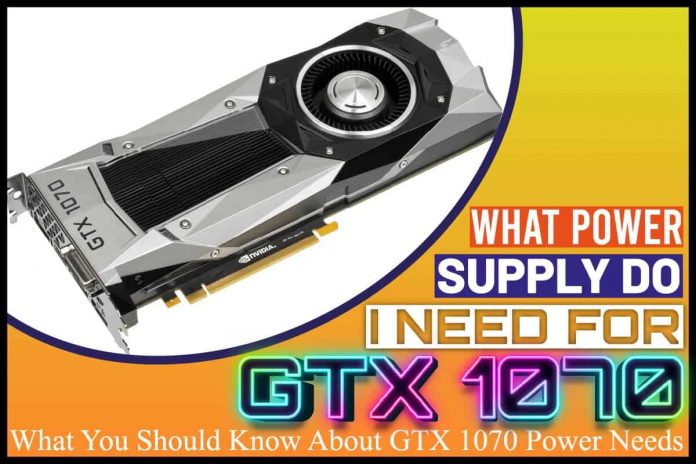 The GeForce GTX 1070 is the performance component graphics card manufactured by NVIDIA. It was launched on the 10th of June 2016 and remains relevant till today. It was built on the 16nm process, and it is based on a GP104 graphics processor. This graphics card is capable of supporting DirectX 12. With its installation, all modern games can now run on the GeForce GTX 1070. It also comes with some other specifications that make it suitable for gaming operations.

So, What Power Supply will GTX 1070 Requires?

GeForce GTX 1070 requires between 450- and 500-Watts power supply on an average system.

What Are The Major Specifications For GTX 1070?

The Nvidia GTX 1070 comes with the following specifications;

It also comes with a 256-Bit memory interface with the GPU operating at a 1506 MHz frequency, and this can be boosted up to 1683 MHz. This graphics card is a dual-slot card; it can draw power from its 1 x 8-pin power connector. The display output components include one DVI, one HDMI, Three DisplayPort, and the graphics card is connected to another system through its PCI-E 3.0 x 16 interface.

The card measures 267 x 112 x 40 mm in length, width, and height, respectively. It comes with a dual-slot cooling solution.

Other Specifications You Should Know About GeForce GTX 1070

The following are some other specifications you should have about the Nvidia GTX 1070;

The GTX 1070 board design comes with dual-slot width, and the TDP is 150 Watts, while the suggested power supply unit (PSU) is 450Watts or 400-500 Watts. DVI, HDMI, and 3 x DisplayPort are the outputs found on the graphics card.

The following are the graphics features of GeForce GTX 1070 are;

GTX 1070 comes with an average power consumption of between 400 and 500Watts. The measure of power consumption was conducted by stressing the GPU to its maximum, while the processor was stressed as little as possible.

Before and after power is passed through the GPU, the wattage gives the testers the graphics card’s total power under Load. The test was conducted and based on the eight-core Intel Core i7on X99 chipset platform. The test run was completed and overclocked to the 4.4 GHz on all the cores.

It was also crucial to disabled all energy-saving features on the motherboard and processor to ensure a consistent power consumption rating. In the end, the GPU power consumption was calculated as the measure of the graphics card power rating.

The Power consumption measured for the GTX 1070 was put at 161 Watts. GTX 1070 was on the top 10 lists of the minor power-consuming graphics cards, thus making it one of the most economical options.

What Happens If Your GTX 1070 Graphics Card PSU Can’t Cope With The Load?

Experts recommend that you purchase a more robust PSU if you are going to overclock the processor or GPU of the computer. If you use a power supply of 400 Watts on the SLI, you should instead go for the 800 Watts model because it is the most power-friendly.

There are lots of good PSUs out there; you have to choose the most compatible option. If the PSU can’t cope with the power load, you may notice a terrible 3D performance. It can also lead to your games crashing, or a spontaneous reset, or imminent shut down of your computer. Sometimes you may notice occasional freezing while your game is on. In extreme cases, a PSU overload on your GTX 1070 graphics card may cause the system to shut down.

Several issues can occur with the entire PC or the graphics card when the PSU becomes overloaded.

The GPU and other components’ temperatures can be measured with the use of thermal sensors. Under heavy gaming and stress, the graphics card temperature stabilized at approximately 76C degrees. Though most gaming conditions are performed at temperatures ranging from 16C degrees to room temperatures of up to 34C degrees, this shows that GTX 1070 has an incredible tolerance for power load at high temperatures.

2. Stuttering Can be Caused by Hard Drive Issues or Malware

Another major problem that can occur due to overload on the GTX 1070 graphics card is stuttering. This issue will reveal some visual stuttering and freezing on your PC monitor screen. Unfortunately, a spoilt hard drive, RAM, or malware issue can cause stuttering problems; therefore, you must troubleshoot this problem to know the main cause. Stuttering is a warning sign that your graphics card is not functioning correctly.

3. Glitches on the Screen

Screen glitches can also be an indication of an issue with your graphics card. If you are playing your games or watching a video and start seeing teary or weird colors on the screen, your graphics card might have developed an issue. It may mean you have to replace the card but still get a technician to handle the problem.

4. The appearance of Strange Artifacts

This issue is similar to the glitches appearing on the screen. A bad graphics card may result in the appearance of strange artifacts on the monitor screen. This issue often occurs as a result of excessive overclocking, heat, or excess dust build-up. Though you can temporarily resolve these issues with a restart, you will experience them again until replacing the graphics card.

Blue screens are not associated only with the graphics card, and they can occur with RAM, hard drives, or any other component. If your system crashes or some blue screens show up while you perform intensive tasks like gaming, perhaps you should suspect your graphics card the more; it could mean the card is on its way out.

A noisy fan is usually associated with a heated-up CPU or GPU; hence it may not necessarily mean your graphics card is bad. A louder than normal fan noise, however, may signify an issue with the graphics card; hence you should pay attention to such. If your graphics card malfunctions while you play the game, it means it is getting excessively hot. Since there is an optimal temperature regulation for graphics cards and other components, your fan should be efficient. Excess power load on your graphics card may eventually damage it.

If possible, you should run some software tests on the performance of your graphics card to ascertain if all features are intact. The software tests should indicate issues like poor temperature ranges, clock speed, and so on. You should be able to discover the symptoms and cause of the problem from your tests results.

Oftentimes you will need a certified technician to troubleshoot and fix issues relating to the graphics card, especially if you still can’t get any improved results from your own troubleshooting. Always use a compatible replacement graphics card that is recommended by the manufacturer.