What Is The Most Used Rail On A Power Supply- A Guide To The Importance Of Rails In Computers? 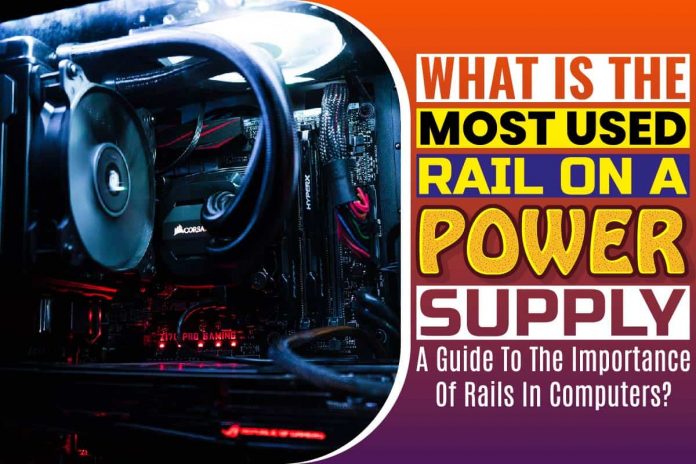 A rail is a wire or path located inside the PSU that transports electricity of specific voltage. Since different components in a computer require a different voltage of electricity, it is essential to connect each to different rails to avoid power conflicts. Since power supply in the form of electricity must be transported between walls and split into the 3.3v, 5v, and 12v, you can only use rails to achieve such. You can split the bigger rails like the 12v into two depending on the need for power.

So, what is the Most Used Rail on a Power Supply?

The 5V Rail is the most used Rail for most drives, including the motherboard and many accessories. The 12V, however, is the most critical Rail because it comes with most of the wattage and accounts for at least 75% of the power output of the PSU.

A Voltage rail can also be said to be the single voltage provided by the PSU. The ATX PSU, for instance, has a 3.3V rail, and this Rail has several wires and connectors that transport power all hardware that need it.

Keep in mind that the original IBM computers generated most of their power from the 5v and 12v. These computers had the 5v Rail because that was the power needed to operate the silicon chips in that era. The 12v was used mainly to operate fans alongside the floppy disk drive motors. The original computer PSU could deliver up to 63.5 watts on the 5-volt Rail.

As time passed and computers began to have bigger and faster chips, there was a significant power load on the 5Volt rails. The addition of more devices like the hard disks and CD-ROM drives also added tremendously to the need for more power on 12V. since the chips consumed the most power, the 5v rails continued to deliver power on most computers for a long time.

Chip technology has since improved, especially with the addition of more numbers of transistors. As these transistors began shrinking, they were forced to operate on lower voltages. When the newer ATX standard was created, a 3.3V was added to the existing 5v Rail to power the more recent chips requiring lower voltages.

Modern PCs started having a mixture of the 3.3 and 5v connected to their respective voltage rails at this period.

The following are the maximum currents and wattages each Rail can handle in any computer;

The 3.3v Rail may seem to be the most straightforward or smallest Rail on the computer but can easily power many components. On a 300 Watt ATX PSU, the 3.3v can deliver a maximum current of 20 amps plus a maximum wattage of 66 watts. It is possible to have a computer with multiple 3.3V for increased output.

The +5 Volts being the most used Rail, powers most components in the computer. A +5v on 300 watts ATX PSU can deliver a maximum of 30 amps. It can also deliver up to 150 watts or up to 180 watts maximum wattage when combined with the +3.3v.

The 12v Rail has the most significant power capacity among the rails, and it is the only one you can split into four units maximum. This Rail can deliver a maximum current of 10 amps and up to 120 watts of power on a 300-watt ATX PSU.

Modern computers have surpassed the 300W ATX PSU power delivery, and you can find many on the 480w ATX PSU today. You will notice from the descriptions below that all rails now have bigger current and wattage capacities on the 480-Watt ATX PSU computer system. The following are the maximum power delivery for different rails on the 480watts PSU;

The 5 volts rail can deliver up to 35 amps of electricity, plus a maximum of 175 watts. This Rail can be made to deliver up to 200 watts when the 3.3v is combined with the 5v rail.

The 12v Rail is capable of delivering up to 28 amps of electricity plus 336 watts of power on the 48-watt ATX PSU.

The 5v standby is a rail type that can deliver a maximum of 2 amps plus 10 watts maximum on a 480 ATX PSU computer.

This is a standby rail that is capable of delivering up to 1 amp of electricity plus 12w of wattage on a 480w ATX PSU computer.

The Importance Of DC/DC Converters On PSU Power Consumption

With improvement in computer technology design, especially with shrinking transistors, there was the need to run voltages lower than 3.3v. It was also become impractical to run all chips on voltages supplied by the PSU. This advancement brought a technology whereby lower voltages were added to PSUs.

On top of this issue, you still need to deal with CPUs that require different volts depending on which type is plugged into the motherboard. The use of motherboard voltage regulators temporarily resolved this issue, which successfully dropped the 5v and 3.3v to lower volts by eliminating extra voltage as heat. As power consumption increased, these temporary voltage regulators became impractical.

PC power distribution eventually changed, and the older computers began to power their chips by direct connection to voltage rails supplied by the PSUs. The newer PC manufacturers, on the other hand, decided to put a DC/DC converter into their motherboard. The DC/DC converter effectively converted the voltage to lower ones that the chips could use.

Many of the DC/DC converters, for instance, were able to convert 5v into lower voltages and the reason being that most power supplies at that time delivered power on 5 volts. The conversion of 12 volts instead of 5v eventually made the wiring a lot simpler because higher voltages could deliver the same amount of power using even smaller currents.

The Benefits Of Smaller Currents In PSU Power Conversion

Smaller currents allow you to use fewer wires and connectors to deliver the same power to your computer elements. This is perhaps the most important benefit of using the DC/DC conversion technology. Power distribution is much easier when handled at higher voltages. Since the highest PSU voltage rating is 12v, that remains the commonest power input voltage by the biggest DC/DC converters.

Today, modern CPUs come with their own DC/DC converters that convert the voltage in the motherboard to anyone the CPU requires. Since the CPU and graphics card are the two largest consumers of power in the computer system, hence when these components are fully loaded, the CPU must provide the full 12v power.

In most of the newer computers today, the PSU provides most of the power needed in components at 12v, and the various DC/DC converters will convert the power to the voltage needed by different chips. In addition to converting power from one level to another, the DC/DC converter protects modern computers from power surges and damages that come with such.

One of the greatest inventions on PSUs in modern computers is the DC/DC converter. Despite the inclusion of this device, the computer still needs a sufficient power supply to power its operations and reduce heat. Excess power supplied to specific components can cause the computer to shut down or heat up quickly. Similarly, a lack of sufficient power supply may create unstable displays on monitors. It is important to check the efficiency of your DC/DC converter to ensure necessary power conversions take place. These checks are even more important when your computer is older than two years.